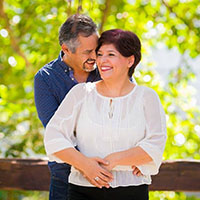 Puerto Vallarta is located in the pacific coast of Mexico; has around 250,000 people and it’s only 4.5 hour drive from Guadalajara City, the second largest city in Mexico.

La Viña started here as a Children´s outreach in 2006 and then reached out to several families and adults that conformed the first congregation known as “Viña La Mesa del Rey” – The King´s Table.

A couple of years later, in 2008, a new kid’s outreach was started in another neighborhood and that is now a church plant in colonia Progresso called “Viña La Cosecha” – Harvest. the center hosts and operates a Dental and Medical clinic to serve the most needed by offering basic dental and medical attention, including meds, provided by volunteers.

La Cosecha meets on Thursdays at 8:00pm for a feeding program and weekly bible study.

Two other locations are now in progress and already have weekly outreaches, which are supported and lead by members of the local church.

Mario and Letty Santillan, had been married for 29 years, and been serving together ever since the beginning. In 1989 started serving in the city of Aguascalientes, showing movies in the streets and preaching the gospel in markets, parks and plazas, then, in 1990 served in La Viña in Fresnillo, Zacatecas as part of the leadership/pastoral team. In 1995 moved with their daughter and son to Mazatlan as part of the planting team and helped start the La Viña in the Golden zone and also in other neighborhoods. In 2000 moved to the Juarez/El Paso area to start a church in the surrounding areas, preaching to the gangs and also to the indians that came from the mountains of Chihuahua, and also to the Spanish speaking community in El Paso, TX and Chaparral New Mexico. In 2006 moved to Puerto Vallarta and started to work in the neighborhoods, showing the love and compassion of Jesus. Nowadays they serve pastoring and mentoring new leaders in town and as part of the Board of La Viña Mexico.